On the Road with the Specialized Turbo Creo

Words and Photos by Chris Force

I was obsessed with bicycles as a kid. There’s a good chance you were, too. Before having a driving license a bicycle was the key to freedom—a way to school, a friend’s house, an after-school job, or, in my case, a tool to explore and discover the greatness of getting lost in a forest for countless hours.

My interest in bikes led me to one of my first jobs at a local bike shop. I saved each paycheck for my dream bike—a Specialized Stumpjumper S-Works M2. I loved that bike. I learned everything about how it was built, completely disassembling it and reassembling it regularly. Then, something sexier rolled into my life and ruined everything—a very used bright red Honda Civic with tan upholstered seats. My beloved Stumpjumper started to collect dust.

When I moved to a city my interest in bikes came back, but this time as a practical commuting solution—I landed on a fixed gear Specialized Langster. For years it shuttled me all around Chicago until in 2019 an electrified VanMoof S2 arrived at our office. It was a slick looking electric commuter, and it quickly replaced the Langster. It made commuting so much easier, enjoyable even. I found myself taking longer and longer rides, catching tiny glimmers of child-like two-wheel freedom feelings. Then it dawned on me: “Why not tour on one of these things?”

In my mind, long (multiple day) two-wheel tours were specifically reserved for motorcycles. But electric touring bikes opened up a whole new opportunity; they could go places motorcycles could not, and with the help of a motor, go much further more comfortably. The Specialized/Fjällräven luggage series is perfect for bikepacking adventures. The Specialized Turbo Creo SL EVO held its own both on road and off.

I had a few requirements in mind when planning this trip, specifically someplace within a day’s drive from NYC where most of our group would be coming from. I also wanted to lean into this not being a motorcycle tour—so someplace with as little traffic as possible was appealing. In addition I considered:

Looking over the possible routes—and the location of other bicycle-riding friends—I landed on the Lake Champlain Bikeways. The series of bike paths and rural roads create a 1,600-mile network through Vermont, New York, and Quebec. It would allow me to fly directly into Burlington, get a mix of scenic paved and gravel roads, bring me through small towns, and ride with minimal traffic, often in protected lanes. It was a pretty easy choice. All packed up and ready for travel in the Thule Roundtrip Hardcase.

My next step was to get an e-bike. Naturally, I gravitated toward Specialized and the Specialized Turbo Creo SL EVO quickly topped my list. I dug around their website to decode all of the naming jargon: turbo means electric, Creo is the model name, SL refers to the motor. When Specialized adds “EVO” at the end of a name it marks that it’s an alternative version, typically something more aggressive. For the Creo EVO that translates to a different tire and drivetrain setup, a slightly different handlebar, and a dropper seatpost.

The design of the bike is what really attracted me first—it doesn’t look like a standard electric bike, which is often clunky with awkward blobs of battery strapped onto the frame. It looks like a standard gravel bike. Industrial design engineer Yann Duez did a masterful job integrating the battery, motor, head unit, and cables all seamlessly into the frame.

I also really liked the graphics and the “Satin Gun White Mountain” colorway from graphic designer Kayla Clarot. A quick glimpse of the stats put the bike at less than 27 pounds, which compared to my 42-pound VanMoof seemed light. I used the range calculator on Specialized’s website and, assuming I would average around 12 miles per hour, figured I could probably squeak out 100 miles a day on a full battery. I ordered one. One of many snack stops, North Hero Island.

The bike arrived at the Chicago dealership and, knowing I would be touring, they outfit it with the full range of bags designed recently in partnership with Fjällräven.

The very first thing I realized is that I’d forgotten how to ride with clipless pedals—the kind that click into a cleat on the bottom of your shoe. When I hit the first red light I realized the clips were too tight, couldn’t clip out, and I nearly tumbled face-first into traffic. Downtown Chicago was probably not the best place for this discovery.

After a few dicey moments I was back in the groove and pedaling away on an extremely smooth ride, unlike almost any other electric bike I had been on. The Creo SL was completely even. There was no jerking motion from the motor kicking in and out—it just felt like, well, a normal bike but easier.

After a few weeks of riding I brought the bike back in for a Retül bike fit. I had never had a proper bike fit before; the experience is kind of like going to a tailor to get a custom suit. They put the Creo SL in a stand and watched as I pedaled. After a dozen or so measurements my fitter made a few small adjustments here and there. I asked if he could address some lower back pain I was having, and the fitter politely reminded me I was likely just really out of shape and then graciously swapped out the stem for a slightly shorter one and installed it upside down to give me a closer reach. It helped a lot. A freshly repacked, and fully charged, Turbo Creo is ready for another day of riding. A view of the Peterson dam while crossing the Lamoille River.

With the bike dialed in, my clipless pedals sorted, and my new Fjällräven luggage packed, all that was left was to get my bike from Chicago to Vermont.

My initial plan was to fly with it. Although it’s a little tricky, the internal battery on the Turbo Creo SL (which is too large to legally be checked or carried on in a plane) can be removed. The bike can then be powered by a special external range extender battery that looks a bit like a water bottle and has been cleverly designed to max out the legal requirements you can fly with. One battery provides about 40 miles of range, so I figured if I packed two of them I would be sorted. But they were on back order.

This left me with two options: I could remove the internal battery, ship it, fly with the bike, and reassemble it all when I got there. Or I could ship the entire bike. I went with the latter. I wouldn’t have the hassle of lugging it through the airport; I could just have UPS bring it to my hotel. Reassembling it would also be a lot easier.

I took the pedals, handlebar, and tires off and threw the Creo SL into a Thule Roundtrip hardcase. It was surprisingly easy. The Thule case has a handle and wheels and was easy to roll around. When I arrived at my hotel in Burlington it was already there waiting for me; it had arrived safe and sound except for one small thing—the rear derailleur was slightly bent. Luckily there was a bicycle shop just down the road and they had it straightened out in no time. On my return flight I popped the derailleur off and the bike arrived back home without issue. With my bike sorted (and the battery fully charged) I met up with our group and headed out from Burlington north to the border of Quebec. The ride began with 10 miles of lakefront bike path and then a 12-mile stretch on the beautiful Island Line Trail—a mix of pavement and gravel that cuts straight through the lake and requires a ferry ride to complete.

After the ferry the terrain turned more rural and eventually gave way to sprawling orchards and charming rustic towns. Many ice creams were eaten, cows photographed, and apples picked. Our group had perfect weather and more than once a rider mentioned how they had forgotten how much they loved just being outside and riding a bike.

As I got more comfortable on the Turbo Creo SL the main thing I came to appreciate was how easy it is to ride. When I interviewed the team from Specialized they were proud to point out that, unlike many of their competitors, they design their bikes, including the motors, completely by themselves, giving them total control. The design of the bike happens in Morgan Hill, California, and the engineering with their tech team happens in Switzerland.

The motor is what Specialized calls the SL 1.1, which they spent three years developing and released to public at the 2019 Tour de France. Cruising along somewhere in Northern Vermont.

To App or Not to App

From my riding perspective what makes the technology of the Turbo Creo SL so great is it’s seamless, nearly invisible. The app that controls the bike, called Mission Control, allows for all types of updates and interesting settings like “Smart Control” to ensure you make it to your destination with 10% battery reserved. For the seriously data-inclined it can also adjust the motor’s power in relation to your heart rate and sync with the popular cycling app Strava. But, perhaps more impressive is what the system lets you not do. You can simply turn the bike on and ride. I almost never used the app.

Using two small buttons on the handlebar you can control the amount of assist the motor provides. There are three presets: Eco, Sport, and Turbo. That’s all I ever messed with, as I preferred keeping my phone stashed away and focusing on the road and the ride. Although I never ran out of battery I was impressed with how nice it was to ride the bike with the motor turned entirely off.  The Creo SL employs a special sprag clutch that, if the motor is off, allows you to pedal the bike directly with no drag from the motor. I enjoyed being able to do nothing other than just turning the bike on. My initial concern with returning to bicycle touring was largely comfort—could I still hang with my friends who were all avid year-round riders? Would I constantly be getting dropped? Would I be too miserable to enjoy multiple days in the saddle, and if I did go electric would I constantly be fussing with it? More than once I’ve been stranded on an e-bike that had suffered a dead battery or some glitchy software that caused it to lock up. Would this happen again—possibly miles and miles away from the nearest town? The Specialized Turbo Creo SL relieved all my worries. It was designed to ride, and that’s exactly what it does. It’s you “but faster.” For the tech interested out there the internal battery holds 320 watt hours and class 3 electric motor that assists up to 28 mph and kicks out 35 newton meters of torque. The bike has perfect, crisp gear changes thanks to the SRAM derailleur, and the ride is extra smooth with its integrated front suspension. But stats aside, all that matters is the ride—and the ride is fantastic. 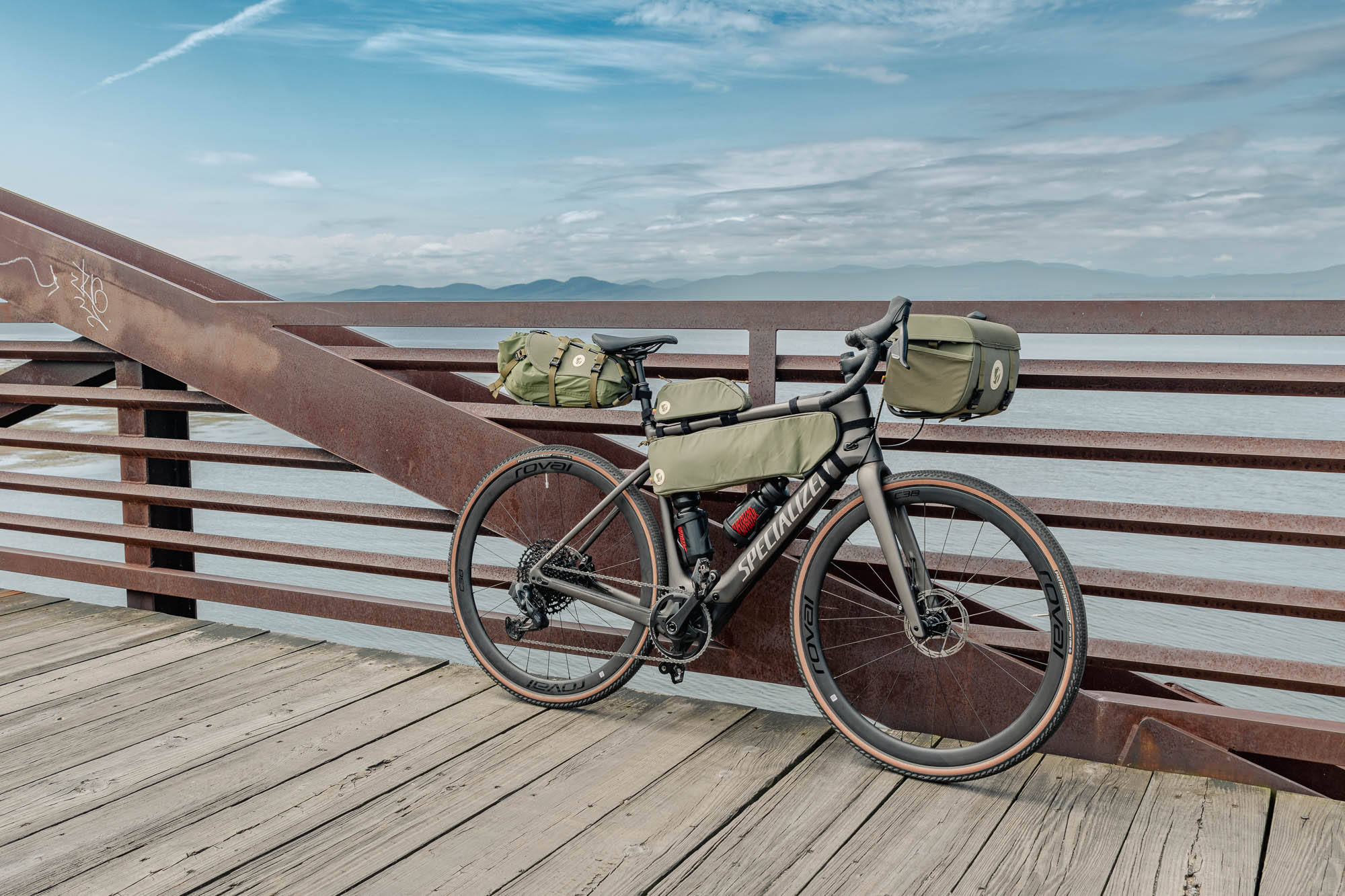 Over the next several days all I did was plug the battery in overnight and ride the hell out of the Creo SL. It was so much fun. The bike requires just the right amount of effort and offers almost no friction between you and the sophisticated tech buried inside.