If the charts I was shown in math class looked anything like Michelle Rial’s Real Life Charts, I would have been much more inclined to study them. Rial melds simple illustrations with three-dimensional objects to create the charts she’s been posting on Instagram since early 2017. With each one, she pinpoints a mundane yet somehow evocative truth.

Rial has been a graphic designer for over 15 years, but after experiencing chronic pain related to repetitive motion, she had to modify her process. She couldn’t sit at the computer for long periods of time and her hands were shaky. I got a chance to talk to Rial—who is now working on a Real Life Charts book with Chronicle—about her daily routine, her approach to creativity, and how she merges her many passions by sharing charts on Instagram.

How do you create one of your Real Life Charts?

When I first started the project I would arrange the object, write around it, and take a photo with my phone. I’ve eased back into computer use over the last year, and I edit more than I used to, but I still try to keep it minimal since there’s a direct correlation between how long I’m on a computer and how much pain I’m in (a chart!). In working on the book I definitely have to work on the computer again, but I try to make it an efficient and quick use versus doing all the work digitally like I used to.

It’s kind of a two-step process in which I draw some really bad, dumb charts that might be obvious or overdone, concept-wise, and then I let them sit for a while. In parallel, I’ll rummage around for objects and I might later be able to merge the two, or elevate the concept in some way.

The watermelon chart was just a piece of watermelon I was eating. It’s really easy to make charts out of food because food always looks fun and pretty. It’s harder to make them out of stuff that’s lying around that you wouldn’t take a second look at, like a hair tie or a bobby pin. I’ll put the object on a piece of paper and think about the different ways I can mess with it—turn it upside down, burn it, rip it up, scan it, put it up against a window, whatever. I make a big mess. 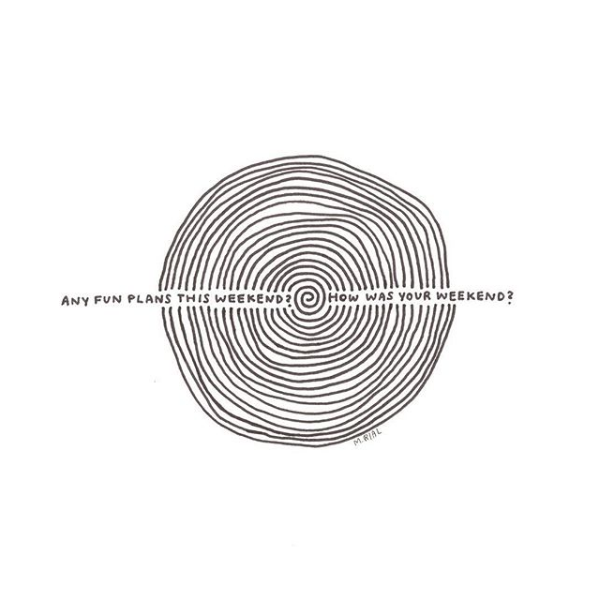 What does a typical workday look like for you? Do you have any practices to get you into the creative zone?

I make black tea at home, but it never feels like enough caffeine and I only drink coffee like once a year (I have a whole chart about why!), so I take our dog for a walk and often get an iced black tea from a coffee shop in the neighborhood. I know it’s absolutely a waste of money but I think it’s the part of my routine that keeps me sane since I work from home.

I listen to music most of the time, podcasts sometimes. I notice that if I listen to NPR or news instead of music I end up not being very productive and just feeling depressed. I feel like I need music, but often find it distracting, so I’m always trying to find the best thing to listen to while I work.

I started meditating a few months ago and I have been pretty on top of doing it daily. It feels like every successful creative person says it changes their life, and I don’t know if it’s made much of a difference yet in my creativity, but I’ve started to hate it less and maybe even look forward to it.

How do you come up with ideas for your charts?

Brainstorming, feelings, random gripes I have. Some of them are updates to charts I made years ago.

I really identify with the way [rock band and makers of elaborate music videos] OK Go talks about their process in their Ted Talk, “How to Find a Wonderful Idea.” They kind of just play in a space for a while before they commit to something. I like the idea of that, though sometimes picking up an object and thinking about it for, say, two weeks (or longer), can drive me a bit crazy. I might have an aha moment while on the train. It also reminds me of this Maria Popova article about combinatorial creativity. My goal is to play with something until I can make it conceptually interesting, and I find that learning about something random that interests me always helps connect the dots later on.

I think most about people I look up to in the creative space. If someone I admire thinks it’s good it really makes my day and keeps me going beyond the feelings of “this is dumb” or “you should stop.”

In addition to being an illustrator, you are also a writer, designer, photographer, and art director. How does illustration for Real Life Charts fit into your career?

I cringe at calling myself any of those things even though I’ve been hired to to do each of them. In every job or project I’ve always wanted to do the whole thing from start to finish. I think it’s why I merged my interests to create Real Life Charts, since they require some element of design, writing, and photography. I think I often feel inadequate in each field but I enjoy them all, so this project was kind of like, “How can I do all the things?” What advice would you give to someone who wants to start sharing their art on Instagram?

Assume you won’t make any money. Don’t assume there’s value in having Instagram likes and followers. Focus on the quality and differentiating yourself from what’s already out there. And like the Anthony Burrill print says, “Work hard & be nice to people.”

Do you have any design resources you can recommend?

Skillshare, YouTube, and any continuing education classes you can find in your area.

Old maps and science books at the library—I get a lot of inspiration from patterns, architecture, geometry, psychology, anatomy, etc.

Some people I’ve found this year that I love are @drawingolive, @irisgottlieb, and @monachalabi.