The artist shares his evolution from graffiti to murals to work for major brands.

Like one of his artworks, there is a lot to take in at the studio of Felipe Pantone, situated in an industrial zone near Valencia. In one section, a team of masked painters is rendering surfaces with the dynamically colored grids, stripes, bolts, and checkerboards that typify his work. In another, an assistant is finishing off 220 Perspex discs printed with a whirligig pattern that will go on to assemble a kinetic sculpture. Ink jet printers, CNC mills, and assorted machinery whir in the background. In a separate space next door, a carpenter constructs wooden crates to ship Pantone’s works to prestigious galleries and art collectors the world over. It’s hard not to imagine Andy Warhol’s Factory when you see this hive of activity, particularly when Felipe mentions that most people who work in his studio he met at parties. He has no idea how many projects his staff of 11 is working on this particular day—a situation that might create a state of panic for most, but not Felipe. He’s calm and considered.

Felipe is of the generation of artists who started in the streets and quickly rose to fame in the world of contemporary art and design. The son of a Latin American family who emigrated to Spain when he was a boy, he started his graffiti expeditions when he was about 13, first copying what he calls “New York-style” graffiti before developing his own dynamic pop and op-art language to stand out from the cacophony of graffiti writers. “I started using a lot of black and white in order to be seen more. And then I started using a lot of vivid colors, and that actually was very effective in the streets,” he says. “I guess nowadays everything is sort of like that. You know, if you post an image on Instagram, you want it to be very loud because these days life moves really fast. You need to create something that captures people’s attention really quickly.” 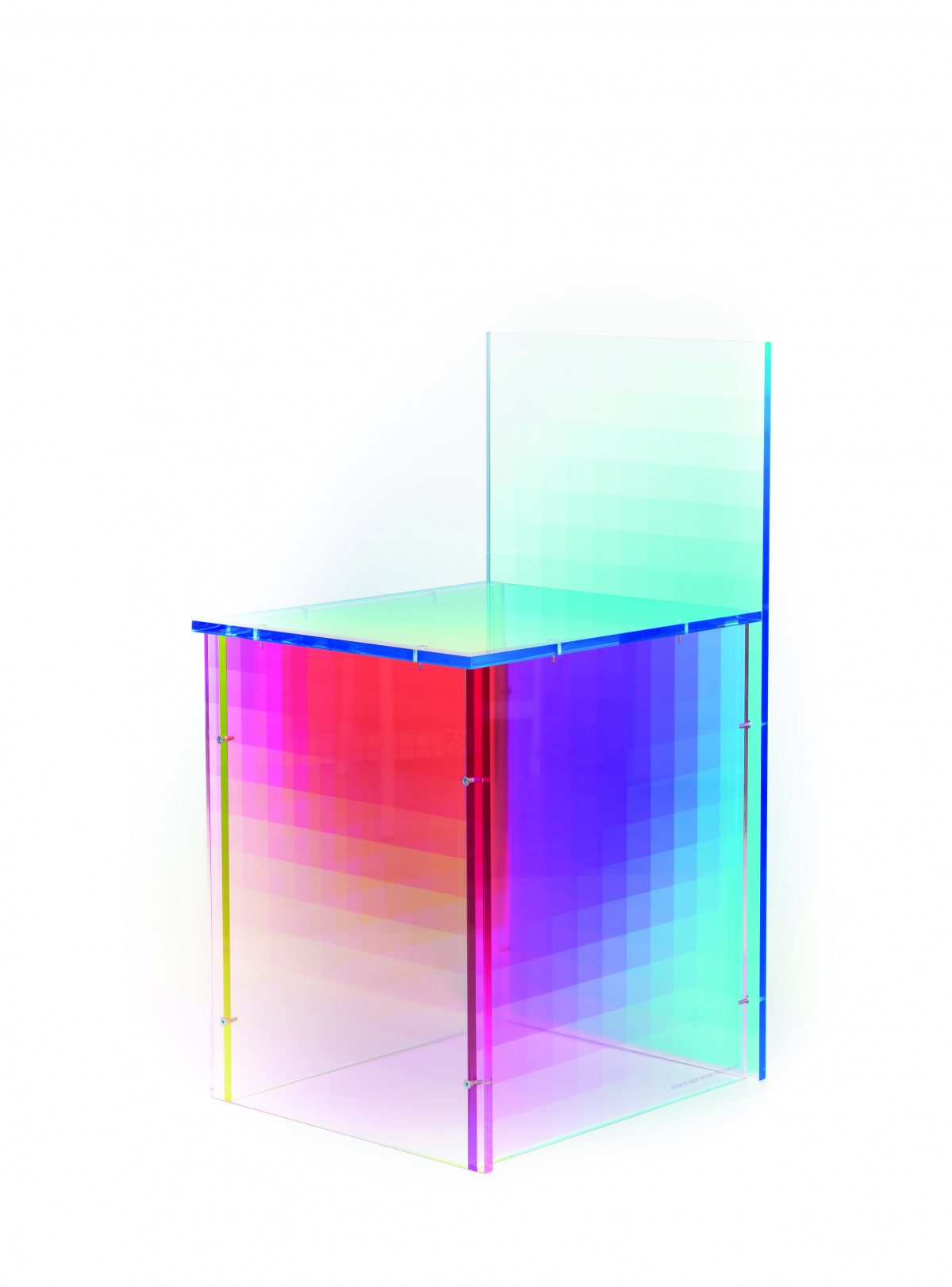 Felipe’s first paid job was a mural for a bar (he bought a push-bike with the money). The format made him in demand for commercial and public projects in cities across the world. Around the facade of the arts school in Valencia where he studied, he wrapped more than 500,000 colored tiles to make a pixelated mosaic, signed in large black and white typeface. For a street art festival in Belgium’s Hasselt, he imbedded a mural with the largest QR code in the world. Scan it to be taken to a global map that shows you the nationality (or smartphone providence) of everyone who’s viewed it. In Las Vegas he created the first solar-powered mural; it lights up the neon work when the sun goes down.

But Felipe said he is not really interested in doing more murals. Having already completed collaborations with a watchmaker (Zenith), sports shoes (Puma), and fine brandy maker (Hennessy), he is most keen to apply his visual language with new techniques and in unexpected ways. Currently on the table is printed leather upholstery for an Archibald armchair, an iconic design produced by the Italian company Poltrona Frau. “The challenge with this project was I had to adapt, distort, and deform my design for the very organic shape of the piece. We had to do many, many tests. But you know, every time I do something like this it takes me out of my comfort zone,” he says. Felipe is also dedicating a lot of his time to his first book (a limited-edition monograph that will be published by Gingko Press), a swimming pool for a private client, and two art exhibitions—one in New York and another in Tokyo. He also wants to launch a fashion line. Felipe’s retro-futurist style is fast and furious enough for Gen Z, while its geometric configurations also appeal to an age group raised on analog. Given its wide appeal and adoration, I asked where he sees himself in 10 years. “Hopefully just staying creative and challenged and keep growing and doing different things,” he says. “You don’t have to be one thing in the art world. I mean, you also don’t have to be in a rock band to play a guitar.” In process zigzags and colorful shapes fill the studio. Photo by Luis Ayora Felipe’s studio is located in an industrial area near Valencia, where his team can be found working on more than 10 projects on any given day. Photo by Luis Ayora

A version of this article originally appeared in Sixtysix Issue 08 with the headline “Felipe Pantone.” Subscribe today.