Alex Strohl lives a life most of us daydream about.

The 30-year-old French photographer spends most of the year traveling the world creating images that mix outdoor exploration with quiet contemplation. For an adventure photographer his work is understated and tranquil.

Alex’s work brings us moments of reflection in idyllic places.

A solo hiker reaches the peak of a mountaintop pass just after sunset, a flashlight illuminating the start of his descent. How long did his journey take him, and now, unaccompanied in darkness, where will he head?

In another image a man, legs spread and hands in the air, leaps from a rope swing into a deep blue cenote. It’s the type of body language you expect to be surrounded by swimwear-clad friends laughing and cheering him on with bottles of beers in hand.

But the man appears alone. But of course, he’s not alone.

Somewhere there’s Alex, perched behind his lens, perhaps with the help of a local fixer, location scout, or photo assistant, directing the scene and capturing the image at just the right time. 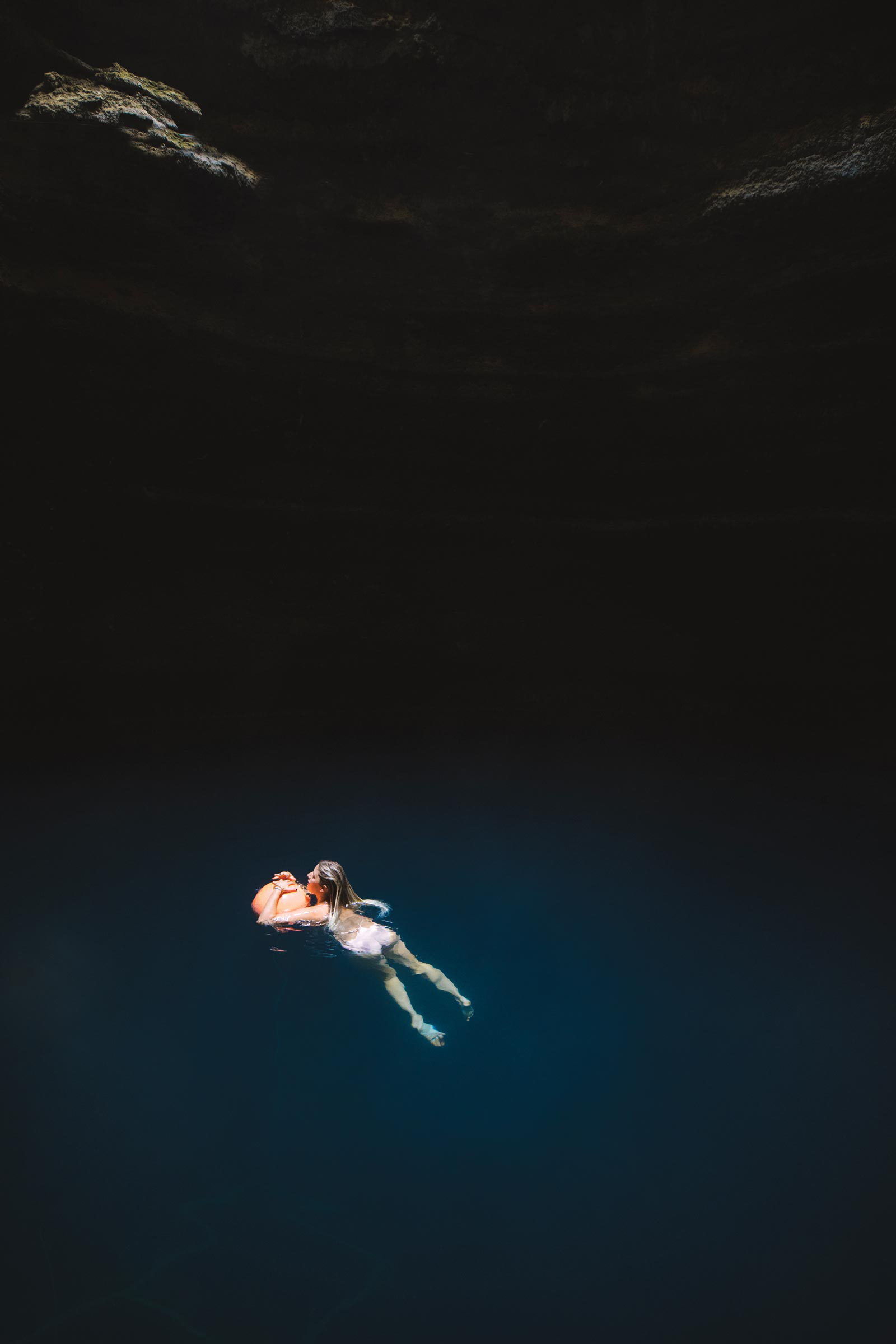 This is one of Alex’s brilliant talents, the way he uses careful planning, hours of preparation, and sometimes entire crews of assistants to make images that appear the precise opposite—spontaneous and solitary.

It’s the ordinary moments in extraordinary locations that set his work apart. He grew up in Spain, but after being kicked out of school, moved in with family in France to attend boarding school.

He took to riding his motorcycle around the woods, venturing farther and farther from home. On one of his trips he brought along his father’s camera and took a few photos. Alex speaks fondly of his father, a British-car collecting forest engineer with a love of skiing and storytelling.

His dad traveled for work, with a stint in Montana where he studied and worked as a lumberjack. He would tell Alex about what a beautiful place it was, with amazing skiing around every turn. The state formed a near-mythical importance for Alex, a mountainous paradise.

In 2016 he relocated to Whitefish, Montana and, with his wife and fellow photographer Andrea Dabene, built a magazine-worthy home in the woods with the help of architect Jeremy Oury.

Although they were both full-time freelancers, they managed to get the financing to build a stunning home, and herein lies Alex’s second magical talent—his ability to find a way.

“Alex is stubborn. If something is on his schedule he will do it, and nothing and no one can change that,” Andrea says. A scene from Alex Strohl’s travels in Portugal, October 2018. He has a knack for storytelling, for color and mood.

He created StrohlWorks to offer photography workshops and videos that explore his gear and techniques.

But when it comes to his craft, his technical ability is not out of the ordinary.

His images break common landscape photography norms, not the least of which is they’re often not completely in focus.

It’s not that he lacks the ability, but you can tell technique alone is not what’s important to him.

He dislikes tripods. He’ll shoot at high ISOs, which produce grainer images, in order to handhold his camera.

When it comes to his practice he considers himself “actually quite lazy,” explaining that he works at most 30 hours a week in his studio, makes time to ski at least twice a week, and spends less than 10 minutes a day on social media (he has more than 2 million followers on Instagram alone).

He likes to read, especially books about walking, a passion of his. It’s hard to think of him as lazy, though.

Alex’s ability to find a way to get things done, to have a vision and wrangle a way to execute it, is more than incredible; it can be downright infuriating.

It’s near impossible to spend any time poring through videos of his impeccably designed home, his portfolio of worldwide travels, or even social media posts of his charming afternoon “cortado breaks” (made with one of those fancy machines that take up half a kitchen counter) and not question if many of the decisions you’ve made in your own life were just plain idiotic. Alex has a mindfulness for the activities we’d probably say we love but often ignore.

He loves food. “He cooks for me every night,” Andrea says. His voice perks up when speaking about the ideal coffee and hard cheeses to bring on remote shoots. He has every part of his crew take turns grinding coffee beans before pushing them through an AeroPress.

Alex and Andrea spent much of 2018 living out of a white Land Rover Defender while exploring remote communities in the Alps.

Why? Because they’d never been to the Alps together.

“You can’t live this lifestyle if your partner works at a law firm,” Alex says.

After their trip they made a book called Alternative Living.

The cover shows a tiny cabin and a small wooden boat nestled into an awkward dock. The scene is sandwiched between jagged mountains, icy water, and a rocky beach. Blue fog coats the sky, a fiery orange reflection from the cabin darts into the lake.

The photo is quite grainy. As Alex reminds us, “The woods are always waiting for you.” This article originally appeared in the Spring/Summer 2020 issue of Sixtysix with the headline “Alex Strohl.” Subscribe today.